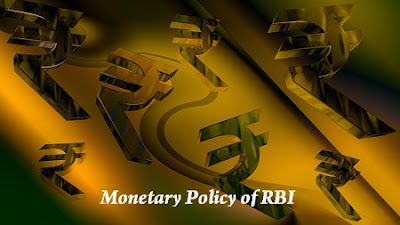 The Reserve Bank of India (RBI) is the central bank of India which is responsible for regulating various financial institutions such as scheduled banks, non-scheduled banks and Non-Banking Finance Institutions (NBFCs). The Reserve Bank of India (RBI) being a monetary authority (Statutory Body) of India is also responsible for formulating and implementing the monetary policy across India.
In this article, we will discuss the Monetary Policy of India by RBI.
Table of contents:

“The Monetary Policy of India is the actions and guidelines of the RBI (Central Bank) as per the RBI Act 1934 which are formulated and implemented to regulate the supply of money, interest rates,  price stability, the exchange rate of the currency”.
The RBI is the Monetary Authority of India and hence accountable for monitoring the economic growth as well as inflation rate simultaneously. The RBI has to fix the liquidity for the scheduled commercial banks to ensure the significant economic growth of India but at the same time, it has to balance the healthy inflation rate throughout India.
The Reserve Bank of India (RBI) utilises the various instruments (tools) to execute its monetary policies in India which will be explained further in this lesson.

The central government of India forms the Monetary Policy Committee (MPC) under Section 45ZB which requires to determine (or fixes) the policy rate of interest. The MPC is responsible to establish the targeted inflation rate.
The Monetary Policy Department (MPD) of the Reserve Bank of India (RBI) facilitates the Monetary Policy Committee (MPC) in formulating the monetary policy of India. Further RBI’s analysts and key stakeholders in the economy of the country also contribute in decision making of policy repo rate in India.
The Financial Market Committee (FMC) monitors the liquidity conditions on a day to day basis to ensure whether the average lending rate is tending to meet the desired policy repo rate.
In other words, we can say that the FMC is accountable to monitor the present liquidity conditions in the market is favourable to achieve the targeted policy rate in the economy. 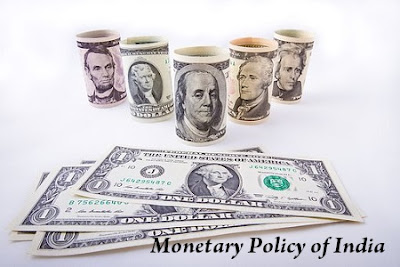 The major objective of monetary policy is to facilitate the economic development of India. The monetary policies are designed in such a way that it contributes to economic growth. The Reserve Bank of India increases the supply of money in the market so that the amount available for advances in the commercial banks can be raised.
Therefore, commercial banks will disburse more advance (or loans) to their customers. Thus the more funds in people’s hand lead to enhanced prices of goods and services. In such a way monetary policy
by RBI facilitates the economic growth of India.

Besides stimulating economic growth, the monetary policy by RBI also controls inflation rate simultaneously across India. It is obviously essential to stimulate the country’s economy but keeping an eye on the prices of goods and services is equally important. Hence the RBI undoubtedly facilitates the economic growth of India, but with a controlled inflation rate.
According to the amendment made in the RBI Act 1934 the Government of India has to be set the inflation target once in every 5 years with the consultation of Reserve Bank.
As per the amended RBI Act 1934, the Government of India targeted the Consumer Price Index (CPI) 4% with the consultation of RBI for the period of 5 August 2016 to 31 March 2021 according to Official Gadget. Further, the upper tolerance limit of CPI is 6% while the lower tolerance limit is 2%.
Prior to this amendment, the flexible inflation targeting framework was governed by an Agreement on Monetary Policy Framework between the Government of India and the Reserve bank of India.
References:
Thus we can conclude that the monetary policy of RBI ensures price stability as well.

Since the monetary policy of RBI determines the interest rates of credit, hence by reducing interest rates it encourages and provides financial assistance to the micro, small and medium enterprises. Therefore, more employment opportunities are generated by these business organisations. Thus monetary policy also intends to reduce the unemployment rate of India.

One of the most important objectives of the monetary policy of RBI must be to stabilise the exchange rate of Indian currency. Since the exchange rate of Indian currency (Rupee) with respect to other currencies of different countries depends upon the demand and supply thesis. Hence more demand of Rupee will appreciate its value with respect to other currencies.
The entire objective can be achieved by controlling the country’s export and import. The RBI promotes
the exports by rediscounting of bills at low-interest rates (or by reducing Bank Rates) and by providing credits to such export organisations at reduced interest rates.

The monetary policy of India is also designed to support backward people in society. The RBI facilitates the people from remote areas and micro, small industries through different financial schemes and loans at lower interest rates as well as special terms and conditions. Thus the monetary policy of by RBI also plays a crucial role in the structural development of priority sectors. 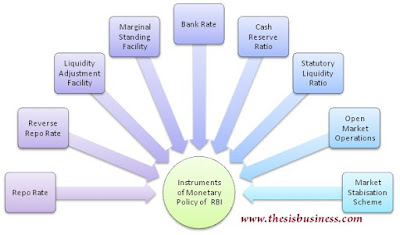 The Reserve Bank of India executes different mechanism and tools to meet its objectives. The RBI has to control the supply of money in the market through a variation in lending or borrowing interest rates  Let me explain the major tools which are used by RBI to implement its monetary policy.

The fixed interest rate at which commercial banks borrow funds from the Reserve Bank of India against the government securities such as government bonds, oil bonds, treasury bills or other approved securities as collateral through a repurchase agreement of the same securities.

It is the fixed rate of interest at which commercial banks deposits their surplus money to the RBI by purchasing the approved securities with a promise to resell those securities on the maturity date. This instrument helps Reserve Bank to suck out excess liquidity from the economy.
For a detailed explanation:

Depending on the current market conditions, the facility of overnight as well as term repo auction is available under the LAF. The objective of term repo under LAF to encourage interbank money market by conducting variable interest rate reverse repo auctions by the Reserve Bank.
For further information:

What is the Liquidity Adjustment Facility (LAF)?

Under this facility, the commercial banks can borrow additional overnight funds from RBI other than repo rate at the penal rate.

What is the Marginal Standing Facility (MSF)?

It is the rate of interest at which the Reserve Bank of India rediscount bills and commercial papers of the commercial banks. It is also used as a penal rate in case of any penalty imposed to the financial institutions. It is always fixed some basis point above the repo rate.
For more details:

What is the Bank Rate?

Cash Reserve Ratio refers to the certain proportion of Net Demand and Time Liabilities (NDTL) of the Scheduled Commercial Banks that have to be maintained with the Reserve Bank in the form of cash on daily basis.
For a detailed explanation:

Statutory Liquidity Ratio refers to an additional proportion of NDTL other than Cash Reserve Ratio that is mandatory to maintain in form of liquid assets such as cash, gold, the government approved securities on day to day basis.
For further explanation:

What is the Statutory Liquidity Ratio (SLR)?

Open market operations offer the sale and purchase of government securities to inject and absorb the liquidity from the market.

What is Open Market Operations (OMO)?

This is the special type of instruments which are implemented to absorb surplus liquidity from the economy due to large capital inflow by the sale of short-dated government securities and treasury bills. The funds collected from such activities kept in a separate account with RBI and can not be further utilised by the Government. This instrument was first introduced by the RBI in 2004.
For comprehensive knowledge:

What is the Market Stabilisation Scheme (MSS)?

Hope you would have understood the monetary policy and its significance in the economic development of India.