When it comes to international trade or large transactions or corporate deals between two parties or individuals where the trustworthiness regarding fulfilment of contractual obligations of any parties or company or individuals is uncertain, there surely arise the requirement of an Escrow Account to avoid or eliminate the risk associated with financial or contractual obligations.
So let us explain the meaning and definition of an Escrow Account and Escrow Services.

“The Escrow Account refers to an account opened with trustworthy third party agencies/ banks on the behalf of both the parties/enterprises/ merchants or people which are under contractual obligation between each other.”
In other words, Escrow Account is an account maintained with the banks or any agencies by the merchants who are going to sign any contracts such as sale and purchase of any goods or services, intellectual properties, house or any high-value deals etc. The Escrow Accounts temporarily holds the fund until the transaction or deals successfully performed between merchants.
There would be always a risk if one party make payment and the second party don’t handover the property or ship the goods or second party ship the goods or handover the properties and first-party do not make payment. Therefore, Escrow Accounts are opened in such cases to reduce the risk involved during such transactions.
The banks or third-party agencies perform as an intermediary between merchants or individuals and holds the money or equivalent assets in the form of cash or securities until the completion of the deal. The banks or other agencies further disburse the amount to the beneficiary after a successful deal and on confirmation of both the parties.
The Escrow Account is used to reduce the risk of default of either merchant’s promises during a deal or transactions. The escrow agent might charge some fees for availing the services. 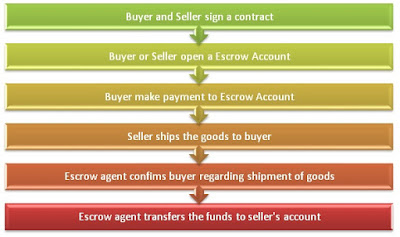 Step 1: The buyer and seller mutually agreed on any deal which could be a sale or purchase of property, goods or any other commodity and enter a contractual agreement.
Step 2: The buyer or seller or both approaches to escrow agencies/ banks to open an escrow account to protect themselves from any dispute.
Step 3: The buyer makes the payment accordingly to the escrow account and escrow agent intimate seller regarding the payment receiving.
Step 4: The seller fulfils his contractual obligations as per the contract and ships the goods to the buyer.
Step 5: Now after getting confirmation from the buyer regarding dispatching of goods the escrow agent transfers the amount to the seller.

Types and Uses of Escrow Accounts:

The escrow account is widely in the USA for the purpose of performing various financial transactions or foreign trade or domestic trade, purchase of shares, purchase of physical properties or intellectual properties etc. We will discuss each one further in this lesson.

Purchase and Sale in Real State:

The Escrow Account is used during any sale or purchase of houses, flats or land between two unknown or known individuals or companies to safeguard their investment.
But there is always a risk of the buyer will not be able to pay the entire amount to the seller after registry of the property and vice verse if buyer pays the amount before registry and seller refuse to handover the property. Thus to handle these uncertainties the Escrow Accounts plays a crucial role to perform such transactions successfully.
Therefore, under this mechanism, an escrow account is opened with the escrow agencies or banks on the behalf of both seller and buyer and the amount payable to the seller has deposited temporarily into an escrow account the buyer. Now the seller will hand over the property to the buyer. The escrow agent will further confirm the deal regarding asset from the buyer and transfer the payment to the seller’s account. Let us understand the whole process from an example.
Example:
Suppose Mr A wants to purchase a land of worth $ 200,000 from Mr B but the trustworthiness is a major hurdle between A and B to enter a contract. Therefore, both A and B open an escrow account with an escrow agent and Mr A deposits $ 200,000 to the escrow account.
Now Mr B will handover the paper of property to Mr A and further the escrow agent transfer the same amount to the account of Mr B after confirmation of Mr A. Thus the transaction of the escrow account is completed now.

Trading of Goods and Services:

The escrow account is frequently used in domestic as well as global trade. Whenever two merchants or trader or company enter a contract of purchase and sale of some goods and services, there might be an issue of creditworthiness of buyer or seller whether both will fulfil their commitment as per the contractual agreement or not.
In such circumstances, the solution is to open an Escrow Account with a third-party escrow agent. The buyer will deposit money or security equivalent to the said amount and seller will ship the goods as per their mutual agreement. Thus after confirming from the buyer if everything is okay, the escrow agent will pay the funds to the seller.

Mergers and Acquisitions or other Business Deals:

The Escrow Account is also used during the merger and acquisition of the companies or any other
business deals. Since the merger and acquisition is itself a complex process and high profile deal
hence to avoid disputes between parties the transactions are done through an escrow arrangement.
During corporate transactions the escrow arrangements are made for extended period unlike other escrow transactions as the process of taking over any company is comparatively a lengthy process. Therefore, funds are held in the escrow account for a longer period which arises other complications.
The escrow service provider is responsible to handle these complications as well. Thus the escrow agent plays a significant role in mergers and acquisitions or any other corporate deal.

The online escrow arrangements have been since the beginning of internet auctions and businesses. The internet escrow, like a general escrow, holds the funds on the behalf of both seller and buyer to provide safeguard regarding disputes.
During an auction that may be of government or a private company, margin money or some proportion of bidding value need to be deposited to participate in the auction. This margin money itself is to be deposited in the escrow account performing on the behalf of the government or private entities.
After the competition of auction or E-tenders successfully, the margin money such collected is refunded to the volunteers by the internet escrow agent excluding the winning party

If you purchase any software you are not allowed access source code even under the software agreement. the software company only allow you to use the software but in case of any issue or interruption, you may depend on the software supplier to resolve the issues which can cost some expense to your business.
In this situation, an escrow agent (Intellectual Property Escrow) comes into the picture. The escrow agent such as International Creative Registry holds the source code of software or application and other information (intellectual property) on the behalf of provider/creator and act as a mediator between the software company and user.
In other words, the escrow agencies establish the legal ownership rights of intellectual properties such as music, albums, songs, content, unique business ideas, design etc.
Final words:
Hope you would have gone through the above content and understood the significance of escrow accounts in various circumstances. The different form of escrow arrangement is available to facilitate a different type of deals, trade and transactions. Thus escrow services can be used by the merchants and individuals as a risk management tool/ instrument.
Related Terms:
What are Nostro, Vostro and Loro accounts?
What is the Letter of Credit (L/C)?
What is Factoring Services?
What is the Promissory Note?
37.09024-95.712891