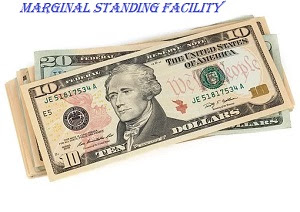 The Reserve Bank of India established MSF in its monetary policy on 9th May 2011. The major objective of MSF was to reduce the volatility in the inter-bank lending rate or call money rates.
Commercial banks often can suffer from short time liquidity crisis because of imbalance in deposits and withdrawal ratio. Therefore, to maintain the Cash Reserve Ratio (CRR) and Statutory Liquidity Ratio (SLR), commercial banks require short term loans.
The commercial banks manage their liquidity crunch primarily using Repurchase Agreement (Repo Rate) from RBI as it is the lowest interest rate offered credit.
Since the limits of availing loans at Repo Rate is 1% of Net Demand and Time Liability (NDTL), hence, if commercial banks further require funds to balance their liquidity crunch, they can avail the loans under Marginal Standing Facility (MSF).

MSF is the last option for commercial banks to borrow money from the RBI. Whenever the commercial banks have utilised all their options of borrowing, they can use the Marginal Standing Facilitates. Some key points regarding MSF are given below.

Although Repo Rate and MSF both are responsible for managing liquidity adjustment for the scheduled commercial banks or other financial institutions, yet there are still some differences between both which are explained below.

Repo Rate lending is the lowest interest-rate loan offered by the RBI whereas in case of MSF the interest rate is always higher than the repo rate lending.

Government securities under SLR maintenance can’t be kept as collateral in repo rate lending, while government securities under SLR maintenance can be considered as collateral in Marginal Standing Facility lending.
Related Terms:
What is Repo Rate?
What is the Cash Reserve Ratio (CRR)?
What is the Statutory Liquidity Ratio (SLR)?

What is Bank Rate?