“Delegation of Authority refers to the transfer of authority/ power to an immediate subordinates/ junior employee to reduce the workload of a manager in the organisation.”
In other words, Delegation of Authority is a process through which a manager or superior employee allocates his own responsibility towards few specific tasks to his team members so that he himself will be able to focus on other significant assignments.
Delegation Process facilitates a manager to be more productive than before because of less workload. Thus he will be able to utilise his time, energy, innovation, ideas and intelligence to other activities which help to expand his area of operations as well as to achieve the organisational goals.
The process of delegation is utilised in every organisation whether it is small or large to ensure the effectiveness of management.
Delegation of Authority not only enable a manager to focus on important assignments but also it plays a vital role in formulating would-be leaders in the organisations.
There are different levels of employee in any company and all are assigned separate tasks by the management of the company. The lower level of staffs report to his immediate boss and further, the different bosses report to their boss and so on. This produces a hierarchy in the organisation.
Moreover, the authority given to lower subordinate can be taken back and can be given to another subordinate if he is unable to perform as per the expectation of management.

Elements of Delegation of Authority: 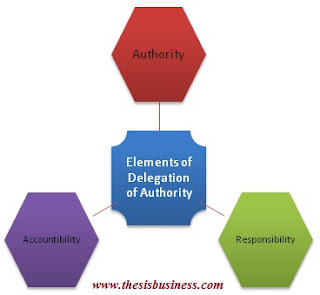 Whenever a team member is given the responsibility to perform certain tasks or series of tasks, he will not only responsible to perform that task but also he will also accountable for various issues arising during the performance of those tasks.
Let us describe the components (elements) of Delegation of Authority to make it more understandable. Typically, there are three components of the Delegation Process that are explained further.

Authority in a business organisation refers to power and rights to take decisions and actions regarding significant strategy, norms and implementation to meet certain objectives. The top management has higher authority whereas lower subordinates have less authority to make any decisions.
In the process of delegation, this authority is transferred to subordinates by a middle or higher level of the manager to perform a specific activity. This means the subordinate who is given authority now will be able to take necessary decisions to complete the assignment on the behalf of his manager.
Moreover, the team members can’t misuse the power which they have provided from their bosses. Also, the authority may also be taken back if they were unable to perform the assigned tasks as per the management expectation.

Once the authority has been transferred to the team members, they become responsible to accomplish the assignments. They will have to perform the assigned work accurately on time by means they are under obligation to accomplish the tasks.
Also, it doesn’t mean that the manager will not be responsible for any mistakes or delay or incompleteness of the activities. He will be equally obligate regarding those activities after the team members.

Thus the responsibility toward certain assignments formulates and develop the managerial skills which facilitate to produce the new leaders in the organisation.

Accountability for performing certain tasks successfully or implementation of SOPs or norms of the organisation can not be transferred to anyone. By means, a manager will be equally accountable for the assignments whether he has assigned the same task to his subordinates. This is different than the manager has to report to his boss, on the other hand, the subordinate will be reporting to him regarding the tasks.
Once a term member has transferred the authority to take the necessary decisions to accomplish certain activities, then it is his obligation to perform the same effect on time. This means he will have to accept the responsibility to perform the assigned tasks.
The manager, as well as his subordinate who is provided authority, will be accountable for the quality of performance for the assigned tasks.

Advantages of Delegation of Authority:

Delegation of Authority is one of the significant aspects of management. The proper utilisation of Delegation process leads to various advantages for the organisations. Some of the major advantages are described below.

1) Delegation of Authority improves the quality and efficiency of management of the company.

There is plenty of work which a manager needs to perform on his own and these excessive burdens might impact a manager’s performance ability and accuracy towards other significant assignments in the organisation. Therefore, the Delegation of Authority plays a vital role in these circumstances to ensure the effectiveness of the management system.

The process of Delegation of Authority provides an opportunity for a manager to transfer a few unnecessary workloads to his subordinate. Hence the manager will be able to concentrate on other crucial affairs of the company.

Thus the allocation of activities and objectives to capable employees reduces the work burden which ensures the quality and effectiveness of the management system in the organisation for rapid growth and expansion.

2) Delegation of Authority facilitates in producing new and potential leaders.

The Process of delegation provides more opportunity to the employees for utilising their time, efforts, potential, innovative idea and intelligence to prove his ability and potential for the specific position in the organisation.

This allows the executives to develop their skills and ability by performing a complex task. Thus it helps in producing the new leaders and better decision-makers which are ultimately beneficial for the organisation.

It motivates lower subordinates because when their bosses give the responsibility to perform a certain task, it not only a transfer of work but at the same time it motivates the employee to perform better due to the trust of his boss which has shown at the time of assignment of work. Therefore, it acts on the psychological level of the employees.

If the team member has completed his assigned task successfully with a high rate of accuracy, he will be appreciated by his superiors. This not only motivates the employee but also create an opportunity to get promoted to the next level. Thus the delegation process provides growth opportunity as well.

5) Establishes Co-ordination among different departments of the organisation.

The elements of delegation help to define the power, duties and answer-ability related to the various position in the organization. Due to this everyone in the organisation well aware of his job profile and responsibility which ensures that there is no interference among them. Thus the better coordination among different departments of the organization is established.

6) Contributes to the Growth of an Organisation:

As we discussed above Delegation of Authority formulates new leader and decision-maker it becomes easy to expand or launch a new division or territory. The organisations don’t need to recruit an experienced and talented employee from outside. The old and enthusiastic employees play a significant role during the launch of the new project. Thus it also contributes to the expansion of an organization.

Thus we can conclude that the Delegation of Authority plays a vital role in establishing an effective and potential management system in a company. It not only reduces the work burden of higher authorities of the company but also prepares new energetic leaders in the organizations which contribute to scaling a small organisation towards large organisations.

Importance of Planning
Controlling in Management