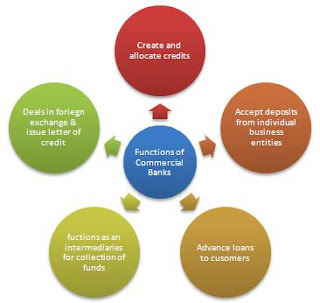 1) Commercial Banks are Creator and Allocator of Credits:

This functions of creating and providing of credit are the most important and unique function of commercial banks. Commercial Banks increases the flow of funds from depositors to creditors virtually, in other words, Commercial Banks increases the supply of artificial money without having the actual amount in cash.
Therefore, the artificial supply of money increases as the number of depositor and creditors increases. Thus we can say, commercial banks deal in virtual funds not in actual because of its unique function of Creating Money. Hence the assets of these banks increase exponentially in Balance Sheet day by day.

Accepting deposits is one of the important functions of Commercial Banks because this is the only and easiest way to generate funds. Commercial Banks are authorised to take deposits from their customers which can be people, small enterprise or private entities.
These deposit of funds may be in the form of following.
Demand deposits are those deposits which can be demanded at any time by the depositors, for example, money deposited in savings accounts or current accounts can be withdrawn any time. Time deposits are those which depends on a specific time period at which it is agreed by the depositors at the time of making deposits. Recurring Deposits and Fixed Deposits are examples of Time Deposits.

This is also one of the most important functions of commercial banks. All commercial banks provide loans to their customers to make a profit. There are several forms of loan and credit (short term and long term basis)  is being advanced by commercial banks.
Few of them are:
We can differentiate Loan and cash credits by the period of borrowing. Loans are known for long term borrowing (More than 1 year) whereas, cash credit is for less than one year. Overdraft facility is available only for current accounts where beneficiaries are allowed to withdraw money from their account up to a certain limit whether the balance is available or not. The beneficiary has to pay back that amount with interest.
Discounting of bills is an agreement between buyer and seller and commercial banks play the role of agent to cash bill on behalf of buyers. The above functions are considered as Primary Functions of Commercial Banks which plays a crucial role in making a profit for the commercial banks.

The role of Commercial bank becomes so essential when it comes to some services for individuals or any organisation. Here are a few examples which would help you to understand the importance of commercial banks as an agent.